In this guide, we'll explore how to use the machine learning based indicator available in Aurox.

Written by Giorgi Khazaradze
Updated over a week ago

Let me start off by saying, although we recommend reading the other guides, it's not 100% necessary as this indicator works differently than the rest.

Our goal with Aurox is to make your trading easier, but the hardest thing to teach is proper risk management. Risk management is a learned skill, and it takes time to really hone it in. We could write an entire course on risk management alone, but why do that when we can create an indicator for it.

Risk management is where the Aurox AI indicator really shines. It makes it easy even for beginners to exit losing trades at mostly break even prices, rather than losses.

Now, just like with every other guide, this isn't a 100% guaranteed system. If anyone promises you 100% accuracy or gains, turn the other way and run. Or if anyone promise you a completely automated system where you simply put money in and it prints more money... JUST RUN!

Everything takes a bit of work and patience, we can only provide the tools that can HELP you, not do it for you.

That's why we always tell our users to practice trading instead of just jumping head first. Any new strategy you read about, whether it's through us or some random blog, always practice. The simplest way is just annotating on the graph itself when and where you enter/exit the trades.

Anyways, enough with the boring stuff. Let's begin... and as always, this will be long. If we don't explain everything, then people are going to lose money.

and frankly it also weeds out people who don't have patience and will eventually lose money because of it.

The algorithm for the AI indicator is based on our original algorithm. It's simply been optimized to be much more efficient with profit take into account, rather than accuracy. Keep this in mind when reading the rest of the article, it's important!

The original indicator was designed strictly to recognize entries and measuring the accuracy of that. If the indicator triggered long, and price went up, that was counted as a +1. If it moved the opposite way, then that's a -1.

But the AI indicator gives 0 shit about accuracy. It cares only about profit. And yes, there is a difference between those.

The core rules are the same. Following these minimizes your risk:

But here is what has changed from the original Aurox indicator:

The Strategy & How To

Again, these are just suggestions.

But these are the intervals that our team has looked over and tested it on. The strategy will remain the same independent of which interval or coin you look at.

The lower the intervals you use, the more trades you will need to take in order to offset the inaccurate ones. Remember, our goal isn't to be accurate but profitable! Plus, unless you've got a bit of experience under your belt, tackling 5 minute interval isn't recommended. Not only do you usually have to have a large balance, or use leverage (which again, isn't recommended for new users) but you'll also be entering and exiting trades very very quickly.

Sticking to 4H and above is more than enough to make money and have a peace of mind for most users.

This goes back to risk management. Risk is higher on lower intervals but it's also much more lucrative when done correctly. The opposite is true for higher intervals. This is the part that you have to determine on your own, our indicator can't predict your experience level.

In order to avoid any new trader from following this guide and getting wiped out, we'll use 4H as the example. But again this strategy applies to EVERY interval and EVERY coin!

Let's take a look at an example chart (you can click on the charts to open up larger): 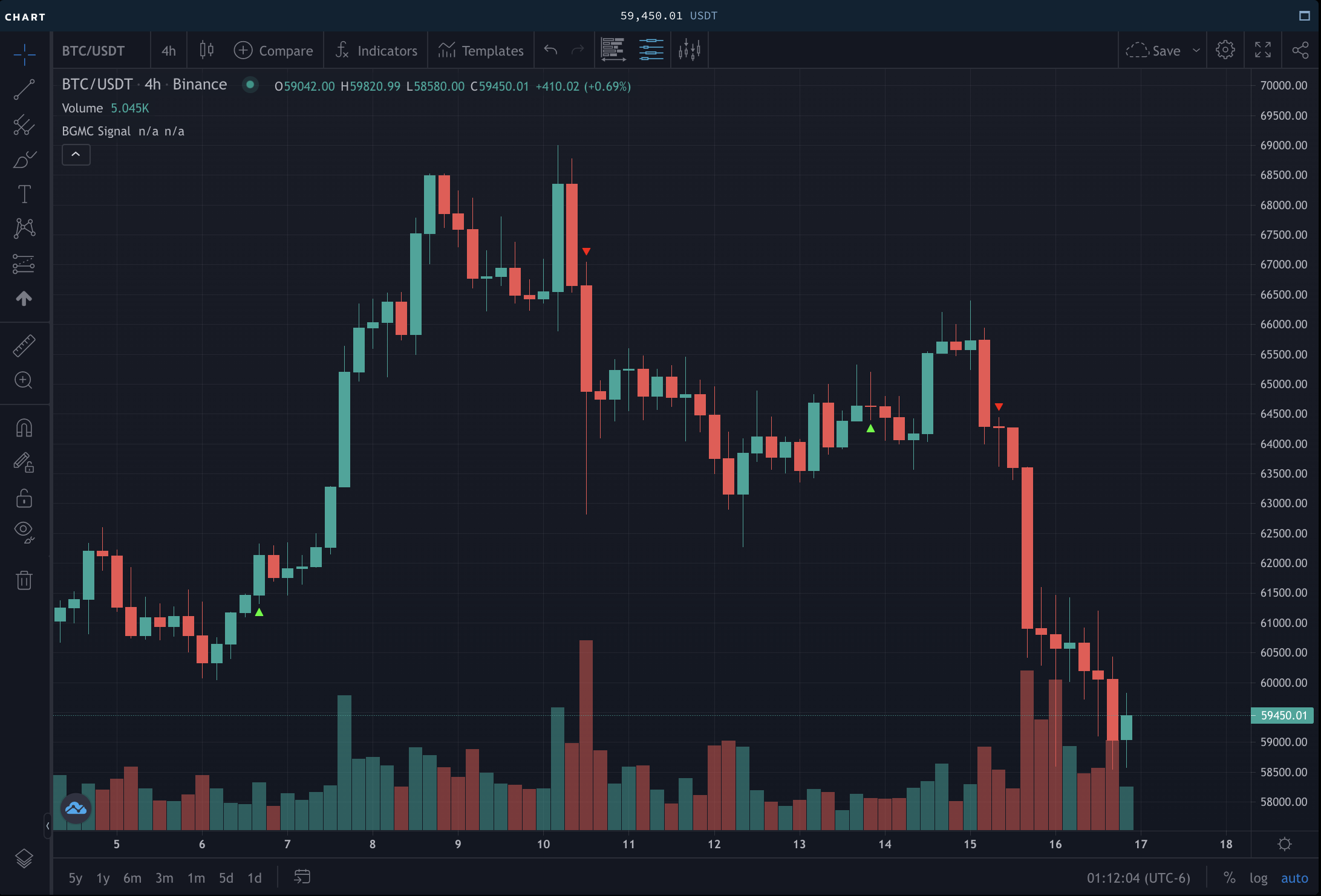 The strategy step by step is this:

That's it for successful triggers. Nothing more... and as you can see from the above chart, every trigger was correct. But what happens when a trigger is incorrect?

Let's take another example that happened few weeks before the one above: 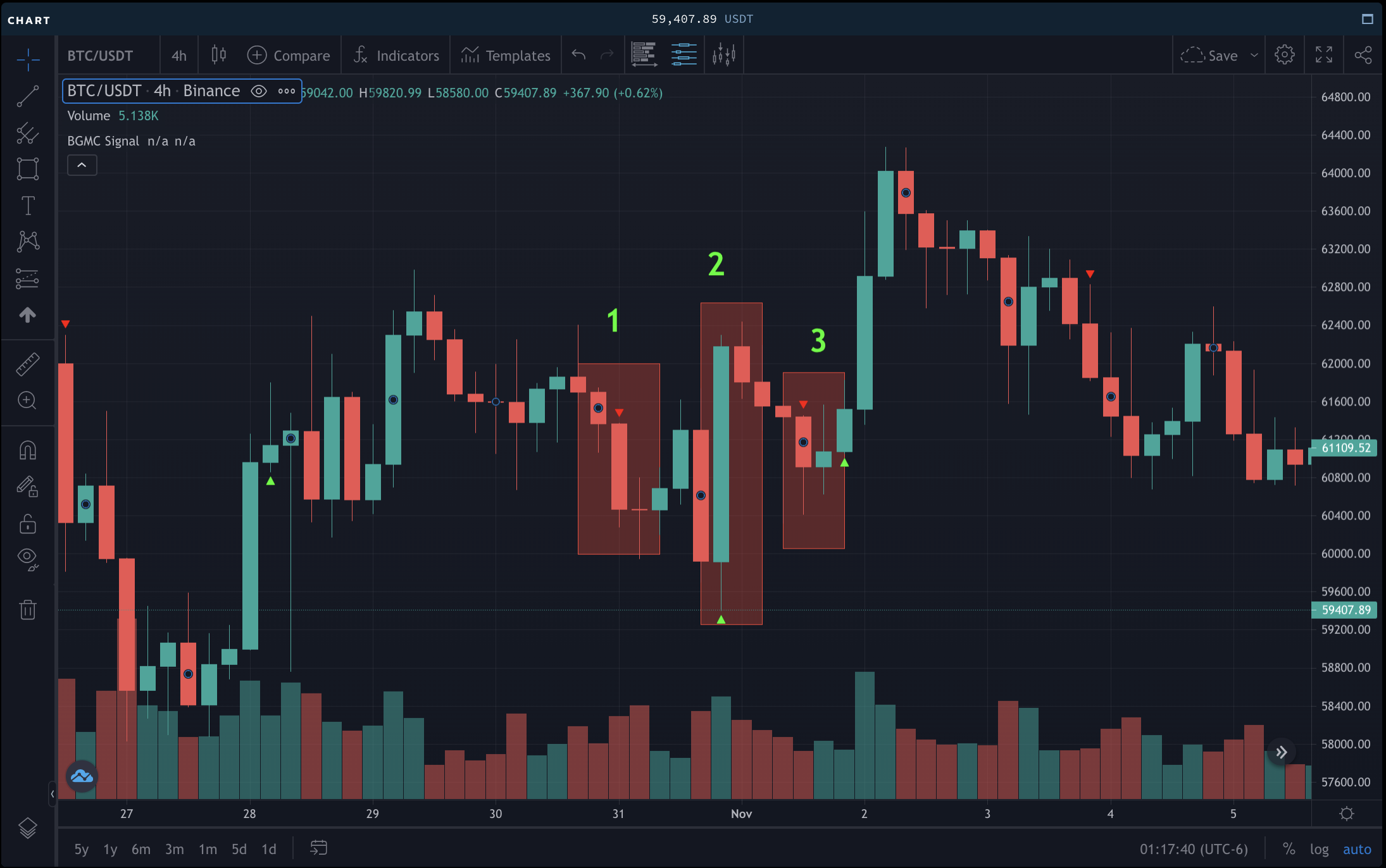 As we can see from the above example, there's 3 bad triggers. Technically there's 2 bad ones, and 1 okay one.

Number 1 did go down after the trigger and then come back up. If you had been taking profit along the way, chances are you probably made some money or broke even. But for the sake of the argument, we'll be extremely strict and evaluate worst case scenario triggers/trades.

We entered short on this trigger when the candle closed, which was $60,467. But then we didn't take profit on the next interval and price went up.

After a few intervals we had our next trigger. This is where you cut your losses and EXIT the entire trade.

Again, if a wrong trigger happens, you EXIT at the next trigger.

This isn't a set rule though. You don't HAVE to blindly follow this, but you should follow this rule if you have very little experience or you are using this indicator and nothing else.

Let's say you're a more experienced trader and noticed something that told you the market was going up... Let's say Elon Musk tweeted he was buying a bijilion Bitcoins to send it to Mars as the official currency for his Mars colony. Obviously, waiting for the next trigger would be dumb if you're shorting the market.

Anyways, let's break it down step by step:

In the scenario above, we would have lost approximately 2.68%. Now, if you had a bit of experience trading, it's possible you would have exited this trade at even lower percentage loss. If you're not an experienced trader, forget the 2.68%, there's more money to be made on the next trade.

Let's move through the rest quickly.

As we can see from the examples, the losses were all under 3%. Did it suck? Yes, any loss sucks. But the point of this indicator is to be profitable, not accurate. The indicator was designed with risk management in mind.

This means the indicator will help you minimize losses and MAXIMIZE profits.

How much profit? Let's look at the whole picture.

Alright, so here's the fun part. Let's analyze the last 20 triggers, and see how much we could potentially profit.

Now, when I do this, I'm going to assume you exited at the PEAK profit. Meaning you entered when the candle closed with a trigger over it, and then exited at the very highest profit.

Obviously this is virtually impossible for most people, but if we know the peak profit is let's say 500%, we can assume that you'd be able to make at least 150-200% returns by taking profit along the way.

Because you only exit left over open trades via the next trigger, it's impossible to know when and where you'll start to take profit. Therefore, this is the only way we can really calculate it.

Just bare with me and don't discount this strategy yet, it'll make sense when I explain it a bit more below.

Okay, so that's 20 triggers on BTC on the 4H interval. As you can see, even though I said the indicator was optimized for profit rather than accuracy, since we are on a higher interval, it was actually very accurate.

This is expected. Higher intervals will be MUCH more accurate than lower ones.

In this case, it was 80% accurate... But who cares, profit is all that matters.

First, let's go back to what I said before. It is impossible for you to make 97.5% gain following this. This is the MAXIMUM profit you'd reach, because I specifically drew out lines from the entry to the top profitable exit.

No one, not you, not me, no one would ever be able to exit at the top profitable spots. I know that, and I'm not here to inflate the numbers by lying to you.

BUT since we know that the maximum possible is 97.5%, it's a very safe assumption that even a beginner trader would be able to gain 30%, if not more...

Wouldn't you agree? Considering just one of the correct triggers had a maximum of 32% gain.

And that's not all, the most important part to look at is the average precent gained and lost per trade.

THIS is why I said the indicator has built in risk management. When the trade goes against you, you lose almost nothing by following this strategy. But when a trade goes right, you make a significant amount.... Almost 3x as much as losing trades.

Finally, let's take it a step further and compare it to the buy and hold strategy.

Let's assume you bought 1 bitcoin at the start of the first trigger and held it. The price then was $44,074.58. The current price is approximately $59,857. That means the buy and hold strategy would have netted you 17%, or almost half as much as this strategy and indicator with the lowest estimate above for a beginner trader.

Let's just check 15 minute interval to see if our strategy holds up.

Okay, so we have 20 triggers. Let's break it down:

So was it profitable? Sure, but as you can see it's MUCH harder to make profitable trades on the lower intervals.

The movements are tighter, there's more sideways trading, and in most cases, it requires large funds (or leverage). This is why we recommend sticking to the higher intervals for new and intermediary traders. Even 1 hour is profitable enough and simple.

Now, if you're an experienced trader, scalping on the 15 minute interval using leverage and this AI indicator can be extremely profitable.

Again, the percentage gain is based on peak exit points, but if we assumed you were able to do just 1/4th of the total precent gained, that would net you 4% return in just over 1 day... compared to buy and hold, you would have broken even from the start to end.

Finally, this was all done with 1 single indicator. Absolutely no other knowledge, no other indicator, nothing. Just simply following a 3-4 step process.

Most traders that are already scalping on these intervals are somewhat experienced and can add other indicators or strategies to make it even more profitable. But the ones that are just starting out, stick to the higher intervals.

Let's review it one more time:

There's not much more I can say, other than, enjoy. It took a long time for us to get this product live. We've eliminated one of the biggest reasons traders lose money, poor risk management.

Now it's up to you. Digest the info, practice, and implement. Trust me, it's worth your time to learn a little.

Did this answer your question?